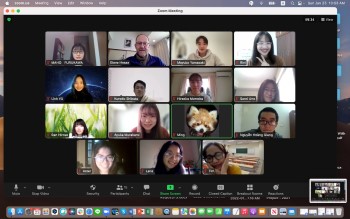 For two years COVID has disrupted plans for study abroad, but it has also opened new doors to interaction with students overseas. One COVID “success” was this COIL program for law students in Tokyo and Hanoi.

Not surprisingly, language was the biggest challenge. All the students communicated in English, but this was their second or third language. In addition, the participants had varying levels of legal knowledge and no knowledge of the other nation’s legal system. The Chuo students were mostly 1st and 2nd year students while the NEU students were primarily older, finishing up their law studies and beginning legal internships.

Despite these challenges, the students did an outstanding job working together in two, 6-week cycles, researching, preparing, and making PPT presentations on Zoom. Students worked with a different team each cycle and delivered 30-minute presentations, which were followed by 30 minutes of Q&A. The first cycle finished in November and the second in January. There were 3~4 students on each team, usually one Japanese and two Vietnamese students.

Each presentation cycle involved several steps. First, the teams would choose a research topic of interest that they confirmed with the professor. After getting feedback and guidance as needed, the students worked on their own. Some teams met with the professor frequently, others less often. Second, the teams used various platforms, such as Google, Zoom, LINE, and Messenger, to do research and share information. One big challenge for the busy students was finding times to meet across time zones, but students in both countries were very cooperative. Third, a week before the final presentations, the teams submitted a draft PPT to the professor for feedback. Finally, the teams made their presentations to the entire group on the weekends of November 20~21 and January 22~23.

During the final debriefing the students were candid about their experiences. All were glad to have taken the course, but they admitted it was difficult to use only English, especially when discussing legal issues. The Chuo students appreciated learning how to do systematic, long-term research, and felt a great sense of accomplishment completing an international project. All the students enjoyed making friends overseas and felt that their English had improved. They also made an important discovery: Working with foreigners doesn’t require perfect English, it just takes time and effort to communicate.

Chuo students received two (2) academic credits for their participation in this program. The Vietnamese students joined for a chance to get to know and study with Japanese students.