Hakumon - the symbol of Chuo University

Origin of the White Gate 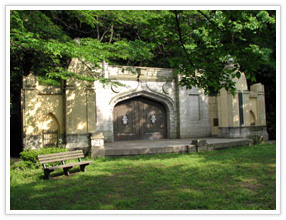 Chuo University was founded as Igirisu Horitsu Gakko (the English Law School) in 1885, in the aftermath of the Meiji Restoration, through efforts led by a group of 18 young attorneys dedicated to the cause of Fostering the ability to Apply Knowledge to Practice.

At the time, French law was the prevailing judicial system in Japan, but in the opinion of these young attorneys, studying British and American law, which was closely intertwined with the social reality, would be more useful in establishing a judicial system in Japan and achieving modernization than studying French law. Their vision was to nurture talent that would be ideally suited to modern society through education at the Igirisu Horitsu Gakko.

The enthusiasm brought by these preeminent and sharp-minded legal academics to their lectures, along with the school’s emphasis on the practical application of learning, attracted many young men who aspired to be lawyers, seeking to bring about a fair and just society. These men took to their studies with diligence, and following graduation assumed their places in the wider world.

Among these men was Takuzo Hanai, a lawyer of extraordinary talent and the first person from a private university to receive a doctoral degree in Japan. Hanai later became known for his “blossom-like oration” because of his unsurpassed ability of speech. Other outstanding students were Hisashi Yoshida, who took his life in hands in handing down the ruling in 1945, in the midst of a worsening war, invalidating an unjust general election; and Nyozekan Hasegawa, a tireless critic of nationalism and proponent of liberalism and democracy both before and after the war. These are just a few of a long list of illustrious and gifted lawyers and journalists who emerged from Chuo University and have left their mark on history.

The unique “Fostering the ability to Apply Knowledge to Practice” philosophy of the school, and its spirit and attitude toward learning, gave rise to the name White Gate. The color white has associations of justice, integrity, purity, and truth. Another explanation for the name involves the design emblazoned in the center of the wall of the Surugadai school building completed in 1926, which is said to have the two characters for Chuo (center) in Japanese, and to have helped inspire the Hakumon name in the early Showa Period.

Chuo University got its start as the Igirisu Horitsu Gakko and has grown into a comprehensive educational institution, currently boasting eight faculties, seven graduate schools, two professional graduate schools, nine research institutes, four affiliated high schools and two affiliated junior high schools.
Having commemorated its 130th Anniversary, Chuo University will continue to preserve its freedom-oriented academic climate, with our spirit of critical thinking, a spirit that is as worthy now of the name White Gate as it has ever been.