A collaborative course with Otemachi Academia, which aims to disseminate the valuable knowledge that Chuo University has cultivated over its long history, was held online on September 21, with many viewers participating. The theme for this first collaborative course was "AI/Data Science and ELSI." ELSI is an acronym that stands for "Ethical, Legal, and Social Implications." It is a term that refers to ethical, legal, and social issues and how we address them, and its necessity for the future AI society has been gaining attention.

Chuo University founded the AI and Data Science Center in 2020, and the ELSI Center in 2021. From each of the centers, Associate Professor Fumitake Sakaori of the Faculty of Science and Engineering, who specializes in statistical science and sports data analysis, and Professor Michihiro Iwakuma of the Faculty of Global Informatics, who specializes in public law and information law, gave presentations and held discussions.

Associate Professor Sakaori, who gave the first presentation, began by talking about the importance of AI and data science in our society as we face various issues such as the declining working population and the increasing fiscal burden. He talked about the current state of AI and its practical applications, such as autonomous vehicles and unmanned stores. He also introduced the difference between the rule-based AI that acts according to rules set by humans, and machine learning, which automatically finds generic rules from data and acts according to those rules.

He also explained in detail about data science, which is a methodology to extract useful information by processing and analyzing data. As specific examples, he explained that in the retail industry, order management and sales floor improvement are carried out in accordance with predictions based on data such as daily sales figures, the day of the week, and the weather. In the field of sports, forecast models derived from the performance tendencies of athletes are used to formulate tactics and form teams.

He also talked briefly about different methods of deep learning, a common form of machine learning, as well as the importance of theoretical research and the seven principles for a human-centered AI society formulated by the Cabinet Office. 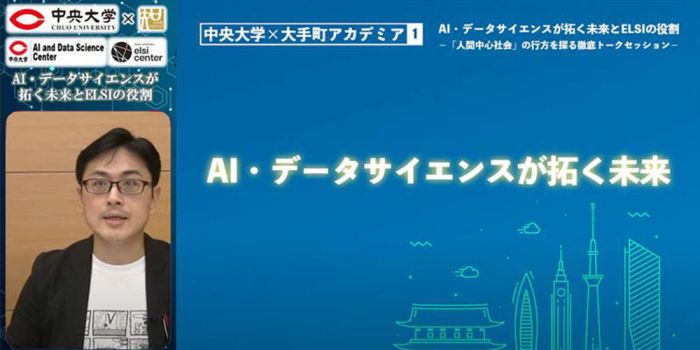 Professor Iwakuma's presentation began with a talk about the development of ELSI in the fields of medicine and life sciences in the United States. By the government accepting ELSI, a system to hold involved companies responsible when pollution or drug-related accidents occur was established in an early stage in the United States.

He further explained the concepts of ELSI, using the Rikunabi incident that occurred between 2018 and 2019 as an example. He talked about the importance of legal, ethical, and social responsibility when explaining what it means to consent to the use of personal information. As a way of helping to understand these ideas, he also described the concept of "architecture" described by American legal scholar Lawrence Lessig. This is the idea that people can only act within the boundaries of the settings and specifications that internet developers have built into their services in advance.

He then touched on the question of where compensation liability lies in the event of an accident is caused by an autonomous vehicle or medical AI. He commented that we might be already at the stage where we need to create systems based on the assumption that these accidents do occur. 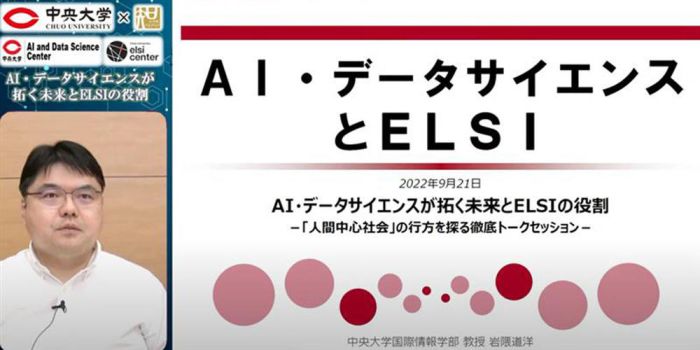 Following the presentations, a discussion was held between the two professors. On the question of whether we can verify the validity of results derived by AI, Associate Professor Sakaori explained that seeking validation on a constant basis is difficult, and that explainability is one of the keys to solve this problem. Once an AI can interpret why it produced certain results, we will be able to evaluate its validity.

Professor Iwakuma explained that in the EU, there is a law prohibiting to rely on AI to make decisions that may significantly impact people's lives, and requires the involvement of humans in those situations to ensure that the use of AI is oriented in a human-centric manner. 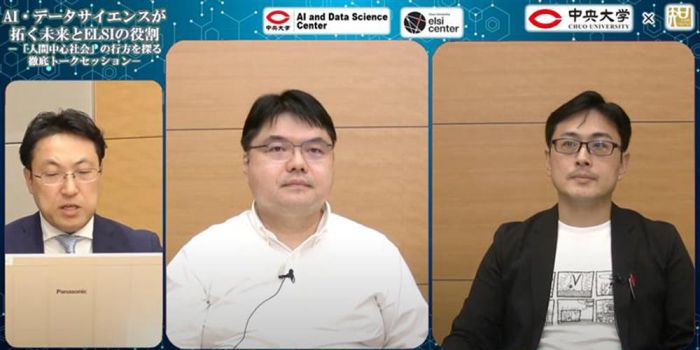 On the topic of a human-centered AI society, Associate Professor Sakaori gave an extreme example of the practical use of AI for hiring, and raised the scenario of a job application being changed without the permission of the applicant, because the AI decided that they were better suited for a different company. In this scenario, even if this leads to a better result, the applicant's emotions are completely ignored. He explained that in a human-centered society, we also need to consider the satisfaction that derive from human beings making their own decisions.

Professor Iwakuma talked about how the types of AI and data science that are designed to select people require special scrutiny, and how important it is for companies that adopt these technologies to develop new legal safeguards that take basic human rights into account. It might be fine to use AI facial recognition for entering and exiting workplaces, but it can become problematic when the same technology is installed in supermarkets to detect people who are likely to shoplift. In China, this system has been put to practical use, and prevents people with a history of problematic behavior from riding express trains. He talked about the need to consider whether this is the kind of society that we want to aim for.

* Click here for the video of the first collaborative course with Otemachi Academia held on September 21, 2022, titled "The Future Created by AI and Data Science and the Role of ELSI--Discussion to Explore the Future of a Human-Centered Society."

His current research focuses on a range of topics including disease control, privacy, and personal information protection issues in the field of medical and health administration; problems related to conflicts between non-legal norms (professional ethics, information ethics, religion, etc.) and legal norms; and problems in the provision of legal information in public libraries. Writings related to this article include Hito wo Taisho to suru Igakukei Kenkyu ni okeru “Doui” to “Privacy” (Consent and Privacy in Medical Research on Human Subjects), Kyorin Shakai Kagaku Kenkyu 34 (1), (2018), among others.