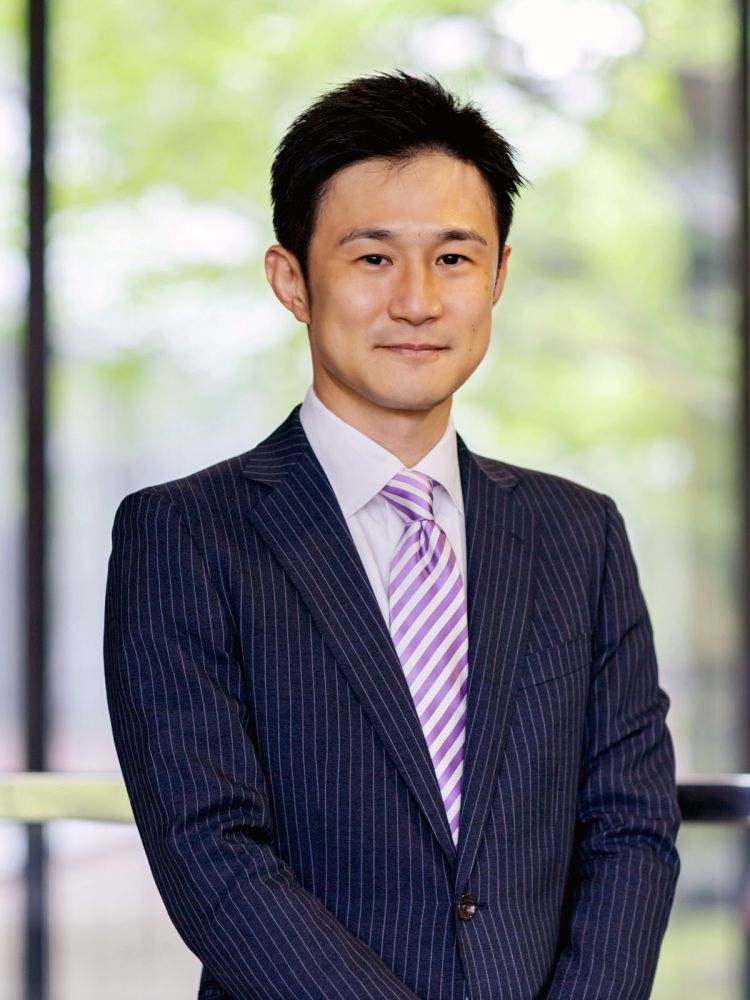 The money stock is increased by bank lending for the demand from firms and individuals. The monetary theory based on this logic is called the endogenous money supply theory, and I analyze monetary economy based on that theory. The central bank does not have the controllability to arbitrarily increase the money stock at any time. Furthermore, the logic that an increase in the money stock causes price increases is not actually true. In the current monetary system, money is endogenously supplied from within the market, and the QE (quantitative easing policy) or MMT (modern monetary theory) based on the exogenous money supply theory reverse the causal relationship. Attractive arguments appear to be easy-to-understand explanations, and so become accepted as common sense. However, the truth of the phenomenon often cannot be explained by "common sense." 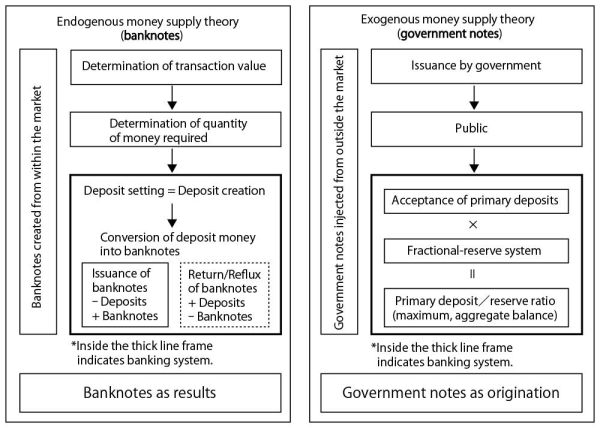 (Source) Reprinted from my manuscript (2021), "MMT's perception for credit money",
published in Ehime Economic Journal, the Vol. 41 (No. 1), The Economic Society of Ehime University.

The loan-to-deposit ratios of Japanese banks have been declining, falling from almost 100% in 1990 to about 60% today. It is widely believed that the factors behind this are the declining birthrate and aging population of Japan, as well as the decline demand for bank lending. However, these beliefs are also fallacies. My research to date has revealed that the direct write-offs/extinguishment of non-performing loans on banks' balance sheet, and the absorption or holding of newly issued JGB by commercial banks and the central bank are leading to a decline in the loan-to-deposit ratios.

Important to the research are the methods and epistemology. In my case, I explain actual conditions by chasing the balance sheets movements of economic entities, and then attempt to build up theory. Research institutions that ensure diverse methods are precious, and Chuo University is one of the few universities capable of emphasizing diverse methods. As a researcher, I am grateful for our wonderful environment.

It has been said that Japan has been in a deflationary economy for the past 30 years, and that the deflation is constricting GDP growth. However, strictly speaking, Japan has never been in deflation after the bursting of the bubble. Although it seems that many people have been told that a sustained rise in price indicators such as the CPI is in inflation, and conversely, a persistent decline is in deflation, monetary theory are not that simple.

Deflation is when prices fall by 5% or 10% every year, and when that decline is caused by a shortage of money. Over the last 30 years, Japan's money stock has grown at a much higher rate than Japan's GDP growth rate. The main reason for this is the monetization of JGB, and it is not the shortage of money in Japan that prevents prices from rising. Instead, it has been difficult for prices to rise due to changes in the structure of the real economy, such as increased productivity, price competition, cheap imports, and a decline in workers' real incomes. I think that prices will begin to rise, under the conditions of the JPY's external value declines (purchasing power of JPY weakens to other currencies), or the price competitiveness increases due to the advancement of corporate monopoly/oligopoly. Whether we see price fluctuations as a monetary phenomenon or as an economic structural phenomenon, there is a significant difference. The logical path assuming that the economy can be stimulated with QE is like a fairy tale. I don't never endorse mentalist using only spirit of "never-give-up" or such as "do one's best." The more I proceed with my research on monetary economics, the more I realize just how difficult it is for money to influence the economy, or how the industrial structure and the real economy are superior to the money market.

Don't be baffled by MMT

Recently, MMT has become a hot topic in the world. Contrary to the naming of "modern" but MMT is actually a concept which relapse into the "Edo era." In the Edo era, while the monetary system was based on metals such as gold, silver and copper, each feudal domain was issuing its own currency (government note/clan note) as well. Do you know the short story "Saigo's currency"? It is written by Seicho MATSUMOTO, a famous Japanese novelist whom I greatly admire. Feudal domain currency are government notes supplied from outside the market by the KING. MMT is correct in some of its concepts of using balance sheets to foster discussion and its explanations related to modern banking functions, and when considering how huge fiscal deficit in Japan today, it is not surprising that MMT is attracting the people not familiar with monetary economics. However, MMT either confuses the world of banknotes with the world of government notes, or deliberately tries to swap the issues. MMTer claims that the money supplied is the flip side of the government debt, and it is necessary to create effective demand by increasing the government debt until full-employment is achieved. While MMT emphasizes correctness by using explanations based on endogenous money supply theory in various aspects, I emphasize that the overall logic of MMT is within the framework of exogenous money supply theory. Goals such as full-employment are generally desirable as an economic policy, but such kindness can have the opposite effect. 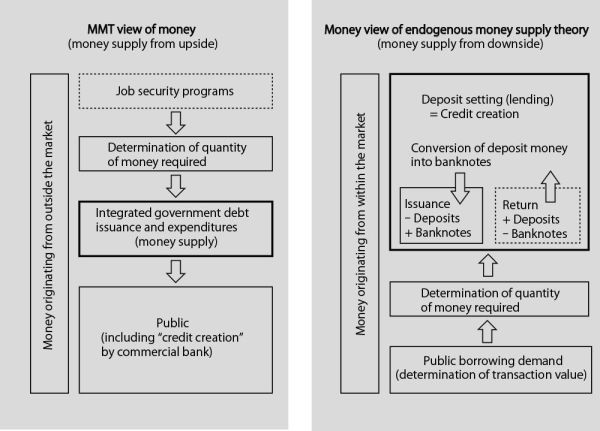 (Source) Reprinted from my manuscript (2021), "MMT's perception for credit money",
published in Ehime Economic Journal, the Vol. 41 (No. 1), The Economic Society of Ehime University.

As mentioned in the previous section, increasing the amount of money will not improve the economy. As the body grows, the volume of circulating blood will be created by the body itself. Imagine what will happen if you are forced to undergo a blood transfusion to increase the circulating blood volume being told that it can make your body bigger. Even myself who is not a licensed physician can understand that such a procedure would be detrimental.

Monetary theory is a component theory, and its significance can only be found by contributing to economics, overall theory. I feel that the type of research that looks at the forest from trees and the type that looks at the trees from the forest will evolve through cross blending. At Chuo University undergraduate and graduate courses, I was able to develop my foundation as a researcher without being swept up in trendy arguments and methods. I would like to actively participate in collaborative research and joint research in fields such as historical economic studies, econometrics, macroeconomics, and socioeconomics, as well as in areas other than economics.

For the time being, I am worried about the Japanese economy due to the increasing probability of selling Japan. I am concerned that Japan's current economic policies, including monetary policy, focus too much on domestic parameters and election votes, leading to a kind of national isolation/insular. I surmise that the problem for Japan will be how to balance a situation in which there is no room for interest rate policy and the cumulative fiscal deficit is 200% of GDP with the floating exchange rate regime of the yen and the free movement of capital. If the speculators or hedge funds really tries to sell the yen, the Ministry of Finance will have to buy the yen and sell the U.S. dollar to offset the pressure. However, there is no doubt that speculators will use leverage. Although official swap agreements exist, it is expected that the limited foreign exchange reserves will not be able to tolerate market pressure. Therefore, we consider the possibility that the currency crisis that attacked East Asian countries in the late 1990s will occur in Japan. The important issues for a monetized economy in an open economy is the creation of markets/business model driven by imagination and the interest rate spread with foreign countries, rather than the narrow issues of foreign relations and industrial competitiveness.