Road traffic congestion in cities is one of the major problems facing modern society. According to a document released in 2015 by the Road Bureau of the Ministry of Land, Infrastructure, Transport and Tourism, the annual time lost due to traffic congestion per person is about 40 hours, which is equivalent to 40% of the time spent in vehicles (about 100 hours). In addition to this enormous amount of wasted time, road traffic congestion also has caused adverse environmental effects such as noise, air pollution, and CO2 emissions. National and local governments have invested a large amount of resources and have been working for many years to solve traffic congestion by expanding existing roads and constructing new roads. However, even if such efforts succeeded in temporarily relieving the traffic jams, the situation continues as a "cat and mouse" scenario in which the traffic jam occurs again with the passage of time.

A strategic situation is one in which the benefits and results that one obtains depend not only on one's own actions, but also on the actions of others. We are surrounded with full of strategic situations other than traffic jams. The innumerable examples include games and sports that are a competition for victory or defeat, as well as price competitions, conflicts, resource acquisition competitions, auctions, and negotiations. In strategic situations, each person will choose their optimal behavior while considering the way in which others behave. Game theory is a tool for analyzing decision-making in such situations.

Research on applying game theory to bottleneck traffic congestion is gradually increasing. However, theoretical analysis alone cannot determine whether or not theoretical predictions deviate from actual human behavior, or how and why such deviation occurs. Ultimately, decisions are made by living human beings. Understanding the characteristics and patterns of human behavior through experiments will compensate for the shortcomings of existing research and will contribute to clarification of mechanisms for the occurrence and transition of congestion.

A well-known model for analyzing bottleneck congestion is the single bottleneck model. This model was originally devised by Vickrey (1969), after which a basic model was developed by Arnott et al. (1990, 1993). Figure 1 shows the shape of the transportation network assumed by the model. There is one road from the residential area (O) to the central business district, or CBD (D), and there is one bottleneck on that road. All drivers want to arrive at the destination at a shared desired arrival time and use this road to commute to the CBD from the residential area. There is a limit to the number of vehicles that can pass through the bottleneck per unit of time, and it is impossible for all drivers to pass through at the same time (that is, it is not possible for all drivers to arrive at the CBD at the desired arrival time). Travel costs for commuting are represented by the following formula.

Figure 1: Road with a single bottleneck

Here, I will introduce a numerical example with three drivers A, B, and C (hereinafter referred to as players). This example makes the following assumptions.

Table 1 shows the results when player A departs from the residential area at t = 0, and players B and C depart from the residential area at t = 1. Player A passed without waiting at the bottleneck, but she arrived one unit of time earlier than the desired arrival time. Since players B and C departed at the same time, the first one to pass through the bottleneck was decided randomly. Player B passed through first and was able to arrive at the CBD at the desired time. Player C was kept waiting at the bottleneck entrance, and she was delayed by one unit of time from the desired arrival time.

3. How do actual people choose their departure time?

In the experiment I am going to run this year on the Tama Campus of Chuo University, about 10 to 20 students will be invited to each experiment session. A large number of players and strategies results in a large number of Nash equilibria, which requires numerical computations to derive them. Since all participants will face the same cost structure in the experiment, it is natural to consider a symmetric Nash equilibrium, an equilibrium in which all players adopt the same strategy, as a benchmark solution. For example, let's assume that there are 15 players and 21 departure times (t = 0, 1, 2, ..., 20) from which to choose, the desired arrival time is t = 15, and the travel time cost, early arrival cost, and late arrival cost per one unit of time are the same as in Table 1. In this case, each player will use the mixed strategy shown in Figure 2 (the top graph is a probability distribution, while the bottom graph is a cumulative distribution). This means that each player chooses the departure time according to the probability distribution in this figure. For example, the selection probability for t = 8 is 0.1581, the selection probability for t = 19 is 0.0090, and so on. 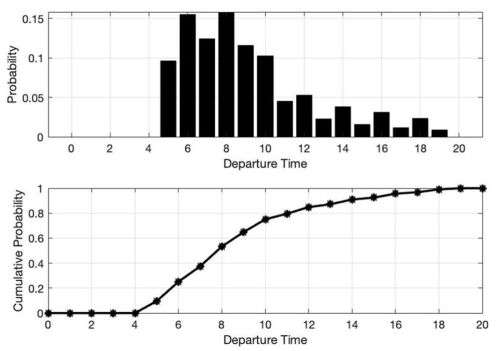 4. Initiatives for the future

There are several possible causes of deviations from the Nash equilibrium on the individual level. For example, game theory assumes perfectly rational players, but real people may rather be boundedly rational. Moreover, to begin with, people are commonly known to be heterogeneous, not homogeneous. Consequently, we may need to use an equilibrium concept that well captures variations in the individuality of players. One candidate is a model that incorporates the heterogeneity of players into the quantal response equilibrium that is capable of ascertaining bounded rationality. When looking ahead to data analysis after my experiment, I would like to proceed with the study of a game theory model that takes these two into consideration.

*This work was supported by JSPS KAKENHI Grant Number JP20K01554.

[1] A survey of experiments on the mixed strategy Nash equilibrium is detailed in Chapter 3 of Camerer (2003).

Hironori Otsubo was born in Omuta City, Fukuoka Prefecture in 1976.
In May 2002, he graduated from the University of Arizona, USA.
In August 2008, he completed the Doctoral Program in the Graduate School of the University of Arizona, USA. He holds a Ph.D. in economics.
He served as a post-doctoral research associate at the Max Planck Institute of Economics in Germany and as a Full-time Lecturer/Associate Professor in the Faculty of Economics, Soka University before assuming his current position in April 2021.