In my research framework, independent variables are organizational cultures; the dependent variable is collective employee engagement; mediator variables are two management practices, more specifically, high commitment work practices and new work arrangements; moderator variables are two dichotomous, national dummy variables that contrast the USA with Japan and the UK with Japan; control variables are industrial dummy variables. I adopted all indicators (organizational culture, management practices, and collective employee engagement) from the prior literature. I modified some of these indicators that had been provided long years ago to be relevant to the ongoing business circumstances so thar the questionnaire items could be easy to understand and answer. All items were evaluated on a five-point Likert scale ranging from 1 "strongly disagree" to 5 "strongly agree." I performed confirmatory factor analysis (CFA) or exploratory factor analysis (EFA)for questionnaire items by each of the areas of organizational culture, management practices, and collective employee engagement in order to extract latent factors behind observable indicators.

Collective employee engagement. Respondents were asked to evaluate how much engaged in their work employees as a whole are. A sample questionnaire item is "Employees feel proud to be part of the company." Researcher cannot basically perform CFA with one-latent factor model constituted of three indicators since the model is just-identified and would always be a perfect fit (Brown, 2006). Thus, instead of CFA, I conducted EFA with the principal component method. I found that three observable indicators converged toward the one factor (eigenvalue=2.50, proportion=0.83). Internal consistency reliability among the three items was 0.90. I decided to use the average value of the three items as collective employee engagement. 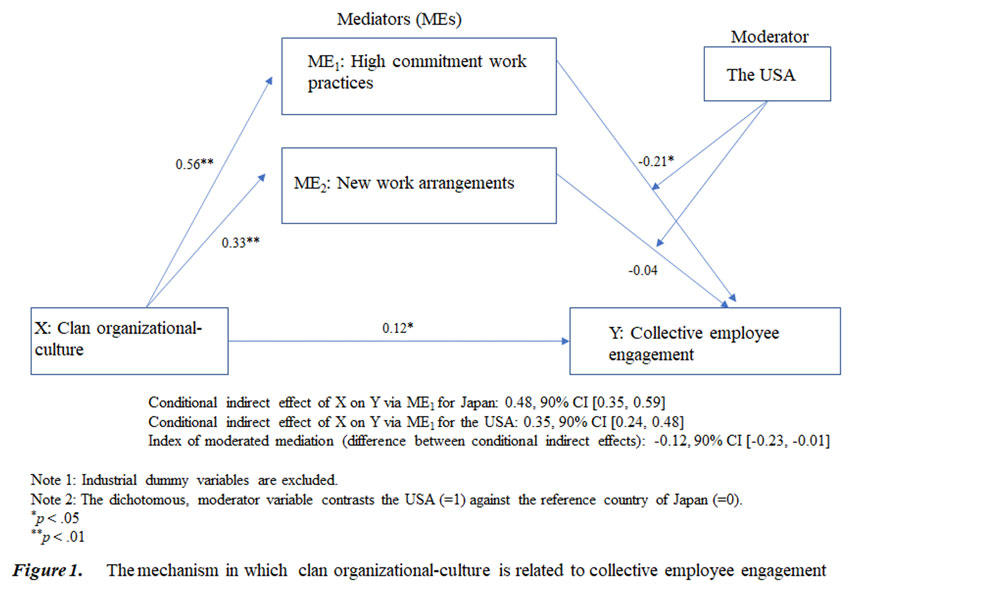 Note: This research study is funded by Japan Society for the Promotion of Science's (JSPS) KAKENHI Grant Number 20K01860.