The Front line in Myanmar

In 2011, Myanmar became a democratic state after being ruled by the military regime. In an attempt to break free from a member of the Least Developed Countries, the country is developing at a feverish pace. Foreign corporations are entering the Myanmar market to seek business opportunities. Toyota Tsusho Insurance Management Corporation is supporting the risk management of those companies. Wataru Shiraishi, who is currently dispatched to Toyota Tsusho Insurance Management Corporation from Toyota Tsusho Corporation, is taking on a role supporting economic growth from the position of an insurance broker in Myanmar.

As a student, I wasn’t good at languages and I never studied abroad. I didn’t study, and only played baseball. However, in my first year I got injured and couldn’t play baseball.

I wanted to concentrate on something other than baseball, so I started part-time work at an advertising agency. The part-time contract became a little troublesome, so I became independent and became an individual subcontractor. I was a student slash one-man advertisement agency. I signed contracts with companies that possessed advertising mediums, such as publishers and internet companies, and sold those advertising mediums to restaurants and PR companies. Regardless of whether I was a student or worker, I received the same amount of salary, so I worked with a sense of professionalism. I earned a lot through this job, and used it to socialize with acquaintances made through advertising agencies. Interacting with people from different generations was a real world experience that gave me a genuine stimulus. I wanted to become great businessmen like them.

I wasn’t sure if I shoud find another job or continue this job, so I didn’t do much job-hunting. However when I had the opportunity to meet with Takatsugu Suzuki, now president of the company en-Japan, I decided to join the company from a sales position. 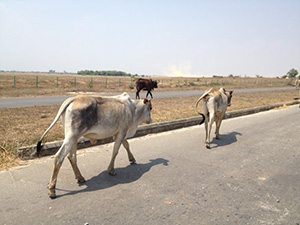 A common scene in Myanmar

I met my sales target and produced positive results. As the next step I moved to Toyota Tsusho the following year. Toyota Tsusho is a company that has bases around the world, extending its business in various categories such as metal and automobiles, medical care and foodstuffs. I developed my career at Toyota Tsusho, not because I wanted to work overseas, but with the passion to create new business and develop new markets.

I have been dispatched from Toyota Tsusho to Toyota Tsusho Insurance Management since 2014. As an insurance broker, I have spent most of the year in Myanmar.

Myanmar became a democracy in 2011. The Myanmar government requested Japan for assistance in law development, and cooperation in law development support activities began in 2013. Among those activities, Toyota Tsusho Insurance Management has been contributing to economic growth from an insurance perspective. Myanmar is still in the development stage. Even if foreign corporations enter the country and want to take out fire insurance in order to build factories, it is impossible to insure due to a lack of funds at the state-run Myanmar Insurance. Foreign corporations detest construction that bears risks and are reluctant to enter the Myanmar market. For that reason, local jobs are not created, and Myanmar’s economic growth stagnates. There, we as insurance brokers bring together the insurance capacity of contracts accepted by Myanmar Insurance from overseas reinsurance companies.

The importance of accepting different values 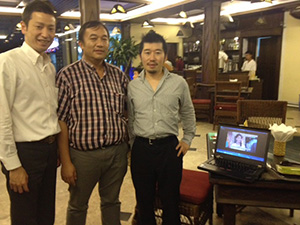 Of the reinsurance brokers working in Myanmar, I am the only Japanese. Including those from other countries, there are about five in total. The difficult aspect of negotiations with reinsurance companies is having them understand Myanmar. For reinsurance companies, Myanmar is still an undeveloped land and there is a negative attitude toward insurance contracts. That is where we convey real stories and have people understand by saying, “The newspapers say this, but Myanmar is actually like this. This risk does not exist, but there are these disadvantages.” But we can’t obtain immediate approval. It takes time. I think an essential skill for this job is not giving up. Don’t pull back when you are turned down, and ask for the reason behind the challenge and work out a remedy. I encourage companies to improve the challenging factor. It is necessary to persevere without quitting. 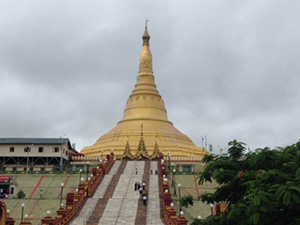 The pagoda which Shiraishi goes to with Myanmar people every morning

Speaking of a difference in attitude toward work between Japanese and Myanmar, in a positive sense, sentimental relations are required in Myanmar. In Myanmar, even in companies, email is not often checked. So you have to go and meet the people directly and talk to them face to face. However, because I believe in getting to know the other person well to conduct business, I spend a lot of time in appointments chatting about their experience and ideas, and spend the remaining time talking about the contract. This is because I believe that getting to know the other person, and having them get to like me, is the trick to doing good business not only in Japan. It has been eight years since I started to work in Asia including Myanmar, and I have noticed that there are vast differences in thinking depending on the birthplaces and religions of the many minority races. If you are to work overseas, I think it is necessary to understand and accept various values without pushing your own. I feel it is extremely important to conduct business after understanding the background of your clients.

The true charm of this job is that an employee like myself can hold discussions with high-ranking people such as the Myanmar finance minister and insurance company presidents. What I want to say to students is that language is the key to studying for your career. Especially if you want to work globally in the future, now is the time to do it. When I was a student I didn’t even know what TOEIC was, and I studied English through on-the-job training after joining Toyota Tsusho. If someone like myself can go out and work globally, you can also do anything you believe in. It’s better to think, “I can do anything!” and not limit yourself like “I’m like this so I can’t do it,” or “I can’t do something like that.”

Wataru Shiraishi was born in Ishikawa Prefecture in 1980. He entered the Marketing and Trade Department in the Faculty of Commerce, Chuo University and, while studying, signed a contract as an individual subcontractor with Sankei Living Shimbun, becoming one-man business in advertising sales. He graduated in 2003 and joined fast growing venture business en-japan inc. He devoted himself to new business. He moved to Toyota Tsusho (formerly Tomen Corp.) in 2004. He started up various projects, and after successful expansion, in 2011-2013, he put his efforts into developing new projects in the Asian medical business, centered on India and Indonesia. He went on loan to Toyota Tsusho Group’s insurance division, Toyota Tsusho Insurance Management Corporation, in 2014 and is involved in new entries in the Myanmar insurance market.