Yuko Onizawa
Graduate of the Faculty of Law, Chuo University
Student at the University of Hawaii (Communication major)

For most people, the decision to leave work and study at a university overseas takes a lot of courage. I made this big gamble 3 years ago, the same year as the Great East Japan Earthquake, an unforgettable event for Japanese people.

That disaster taught me to live for the moment. It taught me that the tangible things will crumble. I saw homes and utility poles that were tilted. Manholes jutted out of the sidewalks and water flowed over roads. At that time, I lived in Urayasu City, Chiba Prefecture. Urayasu was one of the most heavily-damaged cities in the Kanto region. Even now, I clearly remember the sight of my city in ruins. “The tangible things will crumble.” On the other hand, intangibles things, such as friendships, memories, knowledge and experience cannot be taken away from us by disaster. My decision to study abroad was based on this realization.

Currently, I am majoring in communication at the University of Hawaii. I am studying about ICT, multimedia, digital cinema and public relations. These classes will contribute to my specialization in PR and advertising.

In a foreign country, I started studying together with students who are native speakers of English. At first, I couldn’t understand most of what my professors and classmates were saying. I was often confused. However, I progressed to the point where I was invited by the National Honor Society, composed of outstanding students from throughout the United States with academic records in the top 15% of their university. I am also an Honor Student in my major and have received an academic scholarship. My name always appears on the Dean’s List each term.

Of course, I was a hard-working student, studying approximately 6 hours every day. Along with my study habit, my friends and professors always helped me. University students in the U.S. study really hard. The library is open 24 hours a day and it is always full of students. Students here are more engaged during class. Even so, I have been able to achieve outstanding academic results thanks to what I learned at Chuo University. In addition to legal knowledge, I obtained logical thinking ability applied to everything such as forming a multifaceted perspective, extraction of problems, and gathering information, conducting analysis and finding solutions. These skills are great assets in my life.

In each class, initially, everyone viewed me as a foreign student from Japan who spoke English poorly. However, once I started submitting assignments and participating in class, my professors and classmates began to see me differently. For example, as part of a public relations class, students sent articles to the prominent local newspaper Star Advertiser. In this practical assignment, students were guaranteed an A if their articles were published. From among about 20 students, 3 articles were published—including my own. I succeeded in getting an A from a professor who was known for being a strict grader. When writing the article, I considered information that readers would currently be interested in. Because of this consideration, my article impressed the editor. 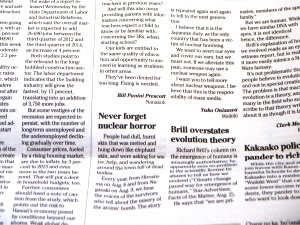 “What do you think would happen if laws were not enforced for five minutes?"
This question was posed by my professor in my first introductory law class at Chuo University. Law is an unseen force which protects order in the world. I decided to study law because I believe that person who has knowledge of laws would be a stronger players in society. While studying laws, I felt that my thoughts gradually became more organized and I gained the ability to consider issues logically. Legal study provided me with more than I ever imagined.

The Power of Hawaii

Ever since the appearance of the internet, globalization has advanced dramatically. While working in public relations, I realized that globalization was important when I had to create English-language pamphlets and guide executives from foreign countries. I strongly felt that being proficient in English is a necessary skill in today’s world and I decided to study abroad. The biggest reason I chose Hawaii is because of the wonderful climate. Unlike Japan, Hawaii has no severe weather such as oppressive humidity or wintry climate. It is truly a perfect climate to focus on my studies. Even waiting for the bus is pleasant because of the comfortable breeze. Another great thing about Hawaii is that the people are calm and kind. Studying in a foreign country is difficult, however I believe that Hawaii made this challenge enjoyable. Recently, Chuo University opened an office at the University of Hawaii. I have heard that current Chuo University’s students are very fortunate to have many opportunities to study in Hawaii. I wish that an office existed when I was a Chuo University student! At the same time, I am very proud of how my alma mater continues to improve the needs of students today. One positive aspect of Chuo University is the close connections between professors and students in seminars for the graduation thesis. For example, I was contacted by my former professor and was able to attend the recent opening reception for the Chuo University office at UHM. It is wonderful how Chuo University cares for students, as well as graduates.

To Become the Strongest Player

Modern society is changing rapidly. Technological evolvements create new demands on working professionals. We live in a time that requires constant studying to keep up with the trend.

My former boss at an advertising agency once told me the following: “You will consume all your knowledge that you learned during the 4 years at university in your first year at our company. You must always be on the lookout and acquire new knowledge.” These words have had a great impact on my motivation for working. I believe you should continue to learn—you alone decide if learning is arduous or enjoyable. The answer will change your life. In truth, learning gives you the “cards” to gain the upper hand. That is the meaning of learning and why I continue to study.

Yuko Onizawa was born in Chiba Prefecture. She graduated from the Faculty of Law, Chuo University. She worked at a major advertising agency, at the university PR department, and as a radio DJ. After the Great East Japan Earthquake in March 2011, she left her job and journeyed alone to study at the University of Hawaii (currently enrolled).