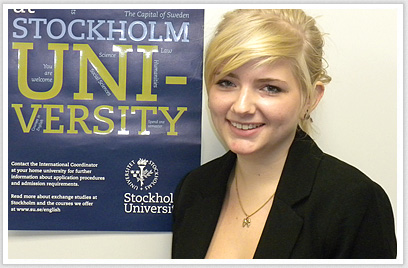 How long have you been studying Japanese?

Three and a half years. My major is Japanese and I started studying in university. In 2009 I came to Japan for the first time for a three-month language program at Nihon University. After that I came back again on my own for one and a half months. Then last May I came to Chuo. I was supposed to come in April, but because of the earthquake I had to wait and see what would happen. I wasn't worried but everyone else was and they told me not to go. Now I'm a 4th year student at Stockholm University and when I go back I'll write my thesis and graduate.

Why did you choose Chuo?

It's in Tokyo and I have friends in Tokyo. I could choose from universities in Tohoku, or Kyoto, but Chuo seems closest to my Japanese friends!

Where do you live?

I live in my own apartment nearby. I love it, it's beautiful here, and I can ride my bike to Chuo. I like my own place. I've lived in the dorm before, and it didn't suite me. I need my privacy. For me, sharing a kitchen is no problem, but I like my own shower and bath.

What are you studying?

I'm studying all different stuff, Japanese literature and Japanese society. Last year I took four Japanese language classes and three this year, and some English courses, such as Japanese Literature and Prejudice and Discrimination.

What is your plan for the future?

Do you have any advice for foreign students who want to study in Japan?

It's good to speak Japanese with Japanese people. It makes a difference when you communicate with Japanese in Japanese. I feel closer to them in Japanese rather than speaking in English. Also, daily life can be expensive, so you need money!